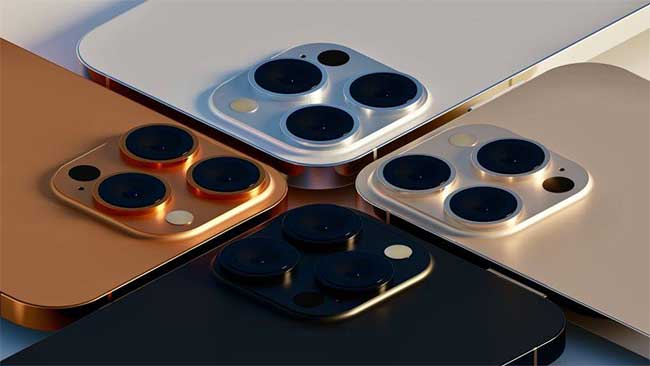 There is even more news that the iPhone has already tested Touch ID under the test screen, but unfortunately, this technology is not used in this generation of iPhone.

Apple Is Still Not Slow

In the short term, we still have to continue to endure the eye-catching bangs, even if the Android manufacturers next door have already offered their off-screen cameras. However, users who have long complained about the problem that they cannot be identified by Face ID after wearing a mask may be improved.

Another improvement related to the appearance is that the lens position of the rear camera module of the iPhone 13/13 mini may be changed to a diagonal arrangement.

This generation of iPhone will probably add two new colours, one is close to matte dark black, and the other is close to brass-like gold.

It is Apple’s traditional art that every new phone must have a new color scheme. Under the premise that there is not much change in the design, it has to introduce new color schemes to help everyone distinguish between the old and new iPhones.

For consumers complaining about the fact that the stainless-steel middle frame of the Pro series is easy to be contaminated with fingerprints, Apple will also make corresponding changes for this and may add an anti-fingerprint coating in the process of processing the frame.

In terms of functions, this generation of iPhone will still suffer from imaging technology. Well-known analysts said that the entire series of iPhone 13 cameras will support sensor displacement image stabilization technology, which is exclusive to the iPhone 12 Pro Max in the iPhone 12 series. The technology, in short, is to achieve optical image stabilization through sensor displacement.

The ultra-wide-angle camera of the two models of the Pro series will be upgraded to a 6P lens, which can increase the amount of light into the lens and further enhance the night scene shooting ability of the iPhone. However, this configuration is not uncommon in the Android camp. I look forward to it. Apple's improvements in computational photography.

In addition, it is almost a certainty that the new iPhone will add processor encoding. First, Apple is already familiar with this. Last year the iPhone introduced Dolby Vision technology. This year, it will also bring newer technologies in the field of video shooting to ensure iPhone continues to be at the forefront of the industry.

The imaging technology has been significantly improved, which requires the silent support of the processor. The processor of this generation of iPhone should still be routinely upgraded to the latest A15 processor. The performance improvement may not be large, but it is still one of the strongest mobile chips on the market.